Oak and Stone: A Novel by Dave Duggan

Oak and Stone by Dave Duggan is a literary crime thriller following a year in the troubled life of Eddie Slevin, a political ex-prisoner turned police detective in a city where stories, myths and mysteries run as fast and deep as the great River Foyle that defines it. Part of an experimental and controversial recruitment project, Eddie Slevin finds himself fast-tracked through the ranks of a revamped police force where his skills and background are both envied and sneered at. His peculiar ability to solve even the most complex cases is grudgingly applauded by colleagues and superiors. But, when a footballer is found face down on the penalty spot with a bullet in his head, Eddie’s professional and personal lives become intertwined in a whirlpool of ghosts from the past, adversaries in the present, and a looming dread in the future.

What writers and critics are saying about Oak and Stone:

“By turns lyrical and funny, philosophical and bleak, Oak and Stone reads like a blend of Adrian McKinty and David Peace. Slevin’s ramblings might be “about as useful as a pitchfork in the tide”, as one of his colleagues claims, but they’re hugely entertaining.”
– Declan Burke, Irish Times

“Sardonically playful and deadly serious, Dave Duggan’s deft subversion of the thriller genre combines sharp wit with astute humanity in a narrative that speeds forward like a crime novel while drawing us back into the unescapable emotional consequences of the past. Oak and Stone is richly original.”
– Dermot Bolger, author of An Ark of Light.

Dave Duggan is a novelist and playwright born in London, raised in Waterford, and living in Derry. He is the author of the novels The Greening of Larry Mahon (Guildhall Press, 1996), A Sudden Sun (Guildhall Press, 2012), and Makaronik (Cló Iar Chonnacht, 2018). His film work includes the Oscar nominated Dance Lexie Dance (Raw Nerve Productions, 1996). Dave’s theatre work has played throughout Ireland and in Edinburgh, Liverpool, New York and Afghanistan. He won the Stewart Parker Trust Award in 2007 for Gruagairí and has published a collection of plays written between 1994 and 2007 entitled Plays in a Peace Process (Guildhall Press, 2008). Dave has also written an imagined memoir, Related Lives (Guildhall Press, 2016), based on a set of family anecdotes. Oak and Stone is Dave’s fourth novel and his first with Merdog Books. 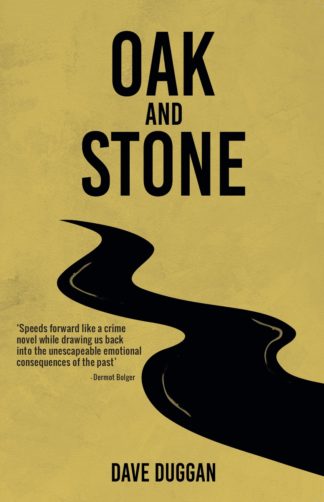 You're viewing: Oak and Stone: A Novel by Dave Duggan €5.00
Add to basket
This website uses cookies to improve your experience. We'll assume you're ok with this, but you can opt-out if you wish.Accept Read More
Privacy & Cookies Policy
Necessary Always Enabled