Room for the River: The Foyle River Catchment Landscape

The Foyle is more than one river. It is one of the greatest ecosystems on the western edge of Europe. The Foyle catchment has shaped the culture and heritage of the north west region of Ireland, from the earliest human arrivals to the present day. It is where issues of legal rights, economic forces, ethnic and communal identity, power and imagination are carried in the flow from source to sea. It provides one of the key narratives in the Irish historical experience.

Room for the River is at once local and global in scope. History, memory, mapping, language, place, lore and identity are all explored in a uniquely personal journey of discovery ‘under the surface’ of the catchment. This blend of nature writing and memoir explores the origins of our disconnect from nature and the associated problems of identity and belonging.

“This book is a fascinating exploration of the natural environment and cultural landscape of the River Foyle catchment area.  A new voice in nature-writing, the originality of Campbell’s contribution lies in his skilful blend of approaches drawing on philosophy, memory and human ecology.  Campbell has written a remarkable book which is thoroughly local; but will resonate with readers worldwide who are interested in human connections with the waterscapes of land and sea.  The volume is a powerful reminder of the importance of our relationship with nature.”

“What shines forth again and again is his love for the river, for its people, and for the world of which it is part. It is a work animated by humanity and generosity of spirit. No-one is better qualified to write about the river Foyle in this way than Liam Campbell – be sure to make room for this book in your future reading.”

“Room for the River is an ambitious attempt to shed light on the interplay of all the various influences that have shaped the Foyle catchment landscape, and the people who have inhabited it, over the millennia. It also signals a warning about the fragility of this precious ecosystem. It could easily have become an obituary for a river and the nature it supports, but it is not. Dr Liam Campbell has given us, not only a valuable historical record, but also a methodology of engaging with the world of nature, and re-connecting with it, in a meaningful and rewarding way.”

Liam Campbell, lives in the Sperrin Mountains in Co. Tyrone and is originally from Inishowen in Co. Donegal. He is the Built and Cultural Heritage Officer with Lough Neagh Landscape Partnership, having previously worked as a television producer before returning to academia. Liam has published and lectured widely on heritage and environmental issues, especially about the north west of Ireland.  He has undergraduate degrees from NUI Maynooth and masters degrees from both Queen’s University Belfast and Ulster University. He completed his PhD at Ulster University in 2011 on the cultural heritage of rivers. He is a visiting lecturer at East Tennessee State University where he spent a year as Basler Chair for Integration of the Arts and Sciences in 2018. He is married to Ann and they have four daughters. 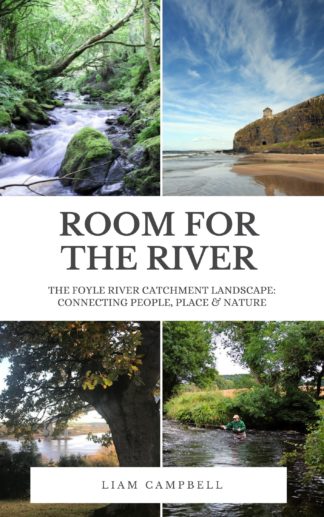 You're viewing: Room for the River: The Foyle River Catchment Landscape €25.00
Read more
This website uses cookies to improve your experience. We'll assume you're ok with this, but you can opt-out if you wish.Accept Read More
Privacy & Cookies Policy
Necessary Always Enabled