View basket “Under Country” has been added to your basket.
Sale!

Under Country is the story of the miners’ strike: the sudden shock of poverty; the camaraderie; the brutality. It is the story of one man’s fight for redemption, as the wounds of an embattled generation hardened to scars.
There was blood on coal, it didn’t come for free. But it drove the factories and the steel works and the power stations. Coal seams were the black spine with which Britain stood upright.

Praise for Under Country:

“Trigell’s compelling tale is written with granular precision and subtle insight; it is a moving, often excoriating story of struggle and redemption: a tale of the recent but still living past that speaks volumes about today. Brilliant.”
– A.C Grayling (Philosopher and Booker Prize chair of judges)

“I was shocked, enraged and deeply moved by the unfolding events in this novel. Jonathan’s writing is so visceral and poetic that it cuts right through you and makes you feel as though you are living alongside his characters. I loved them. Didn’t want it to end.”
– Jill Halfpenny (Actress and Writer)

“a tense but also tender story of how mining and the miners’ strike sent ripples through the lives of many families.”

“Trigell’s writing feels like it was made to tell this story, emotive and tender and yet capable of turning brutally evocative within the same sentence… But by looking back at where the world has been, his writing truly shines as he shows us that where it’s going may not be such a foreign land.”

Jonathan Trigell is the author of four thematically very different novels: Boy A, Cham, Genus, and The Tongues of Men or Angels. Admired for a gritty but literary style, among other prizes, Trigell has won the Waverton Award, the John Llewellyn Rhys Prize and the inaugural World Book Day Prize. Trigell’s novel – Boy A – was dramatized by Cuba Pictures and Film4. It was directed by John Crowley (Brooklyn, The Goldfinch) and starred Andrew Garfield and Peter Mullan. The production won four BAFTA Awards and the Jury Prize at the Berlin Film Festival. Trigell’s strong family bonds to the North East of England underpin his latest work: Under Country. 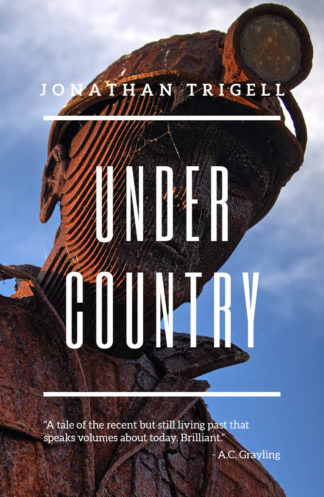